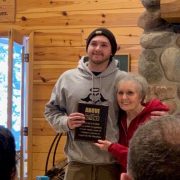 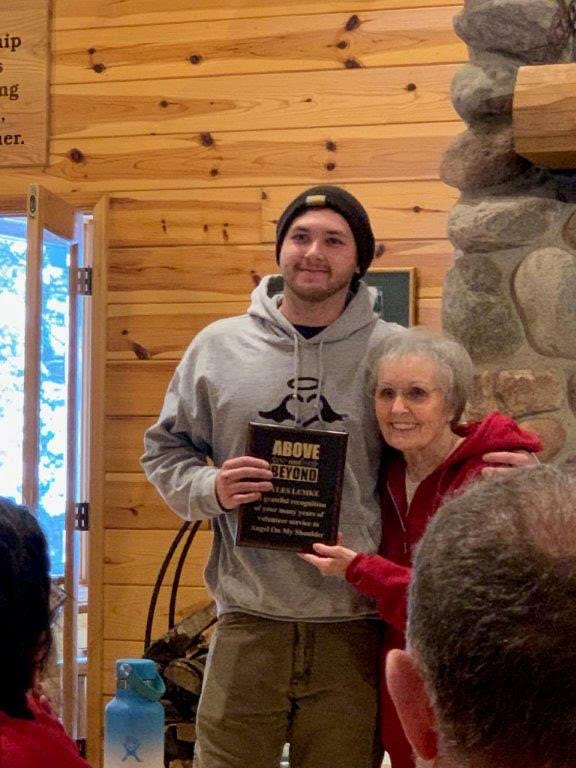 Myles Lemke is passionate about supporting the mission of Angel On My Shoulder and has been actively involved with its programs and fundraising for many years. From the Polar Bear Plunge, to serving as a head counselor for Camp Angel, Myles has shared his enthusiasm and dedication with everyone he meets, from his fellow volunteers to the kids at camp.

Myles currently lives in Muskego, Wisconsin, a suburb of Milwaukee. He works as a repair welder and has been in the welding industry for about six years.  He’s the youngest of his family, with one older brother, Cody.

“When I am not at work, I usually spend my time hunting or fishing,” Myles said. “I am an avid deer and bird  hunter and fish mostly in the winter.  Although I bow fish quite a bit in the spring and  like to golf when I can in the summer as well.”

Myles first became involved with Angel On My Shoulder when he was a child by going to the Polar Plunge with his father and mother, Dick and Dawn Lemke, when Dawn was diagnosed with cancer. “My father jumped every year since it started and I began volunteering with my mother at the winter camp.”

Myles said the adults would give kids rides on their snowmobiles on the lake, and they brought him along to help with getting helmets on the kids.

“My mother was diagnosed again when I was in 5th grade, I believe,” said Myles. “While sick she still drove those kids around the lake even when it was 20 below. My mother was the strongest woman I have ever met.”

Myles sad that although his time with her was limited, he feels very grateful for it. “Many kids come from broken homes and bad situations, but my parents loved my brother and me. They were perfect parents with the situation they were dealt.”

Myles was initially just a spectator at the Plunge but has since jumped for the past ten years. “I have only missed two plunges due to me living out of state,” he said. “I would say my involvement is anything they need help with, and jumping of course.”

Now a head counselor for Camp Angel, Myles described his time with camp as a wild ride. “I was really shy and unsure when I was a camper,” he said. “But I quickly observed that all the kids around me were going through the same thing, which was great for me to see because I didn’t know anyone else my age going through it.”

Myles said that once he became a counselor it was amazing to watch the kids open up over the weekend. “Some kids like myself were very shy and quiet,” he said. “When they arrive at camp, and about halfway through the first night, they start to break through that shyness. You can see them realize that they are not alone, they are not the only kid who is going through this. Which is great because it allows them to put their guard down and be a kid and have fun, to me that’s why we do it.”

Myles said his favorite memories of his time volunteering are the ones he’s shared with his family throughout their involvement with Angel On My Shoulder. “Also those who have become family to me over the years,” he added. “I hope I have made an impact on some of these kids’ lives like they have on mine.”

When asked what advice he would give to anyone considering volunteering with Angel On My Shoulder or an organization like it, Myles said, “Just do it! Its a decision you won’t regret, and it will bring you so much joy. Angel On My Shoulder has helped sculped me into the person I am today.”