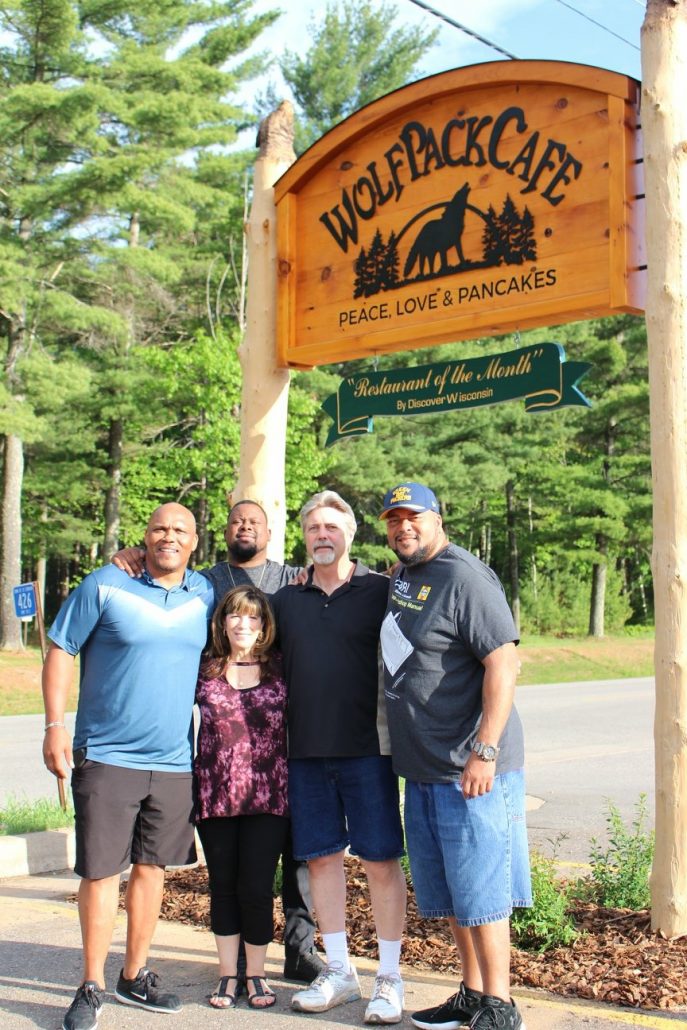 A Recipe for Compassion with Joe and Kathy Lass

Owners of the Wolf Pack Cafe in St. Germain, Joe and Kathy Lass first met at the Vilas County Fair in August, 1988. According to Kathy, “It was love at first sight.” After dating for a year and realizing they needed more than seasonal work in the Northwoods, they decided to move to the Racine County area to start a new life with year-round jobs.

“Joe and I both moved into management positions quickly and decided to get married May 26th ,1990. We came back to Eagle River to celebrate our wedding day with all our friends and family,” said Kathy.

Joe managed a poured concrete foundations crew and Kathy managed a bar and grill, but their hearts were still in the Northwoods. “We came up to visit family the summer of 1998 and a friend told us the St. Germain Cafe had just gone up for sale,” reports Kathy. “I said to Joe, ‘Let’s go look at it!’” The place was in desperate need of some tender loving care, but Kathy believed that with a little elbow grease, paint and effort it would be fine.

“It had a great location in downtown St. Germain,” Kathy said. “We put an offer in that day and closed on it in December.” On January 12th, one day shy of their one year anniversary, they received a phone call telling them they’d been awarded “Restaurant of the Month” by Discover Wisconsin. That was for February, 2000, and Kathy said it changed their lives. “It gave us the confidence we needed to keep bettering ourselves and Joe became an amazing self-taught cook. We are now looking at our 20th anniversary on January 13, 2019 and have loved all the people and the friends we have met and the employees that helped us get here.”

Kathy and Joe first became familiar with Angel On My Shoulder 21 years ago when Joe’s cousin Linda was diagnosed with terminal cancer and wanted to come home from California to Wisconsin to see family before she died. “We needed help financially to get her whole family here for a heartbreaking goodbye,” said Kathy. “Joe’s family and the Roses were neighbors in the 1980’s in Eagle River, and Joe’s mom knew about the foundation Lolly Rose had started after Dick Rose died. Joe’s mom (Jan Lass) called Lolly and asked if she could help, and without hesitation she assisted in facilitating bringing Linda and the family back to Wisconsin. Joe and I felt if we could ever give back to Angel On My Shoulder, we would. Lolly is truly an Angel on Earth!”

The Lasses got involved with the Packers and Angel On My Shoulder when Lolly asked them if they could cook for the golfers in a silent auction they were doing. That became Breakfast at the Wolf Pack with the Packers in 2007. “We have been doing it every year since,” said Kathy. “Meeting all the Packers has also been a highlight. It is so cool that they offer their time giving back. Especially William Henderson and Gilbert Brown. They are our true heroes! Watching little kids eyes light up when they come in the cafe is amazing.”

Joe and Kathy had to give up cooking for all the golfers on the course but hope to someday be able to do it again.  “I am certain will we always be there for Angel On My Shoulder as long as Lolly will have us!”

When asked about their fondest moments volunteering, Kathy said “The smiles that Lolly brings to everyone she meets. She is a such an inspiration for everyone to get involved. What one woman with this amazing heart can do is amazing in itself.”

Kathy said Lolly has brought a whole town together to help those in need. “Lolly brought 5-year-old Cameron, who had cancer, to the cafe and we played with cars on the counter, and then we went into the kitchen and we let him hit the bell for the waitresses to come pick up their food. Little Cameron and his brother were so happy to be able to hit that bell. It was nice to see him smile.  Knowing Lolly and what she has taught us in the art of caring is my fondest memory.”

Charlie Kotke and Peggy Nimz: A Dynamic Duo for Angel On My Shoulder
Scroll to top