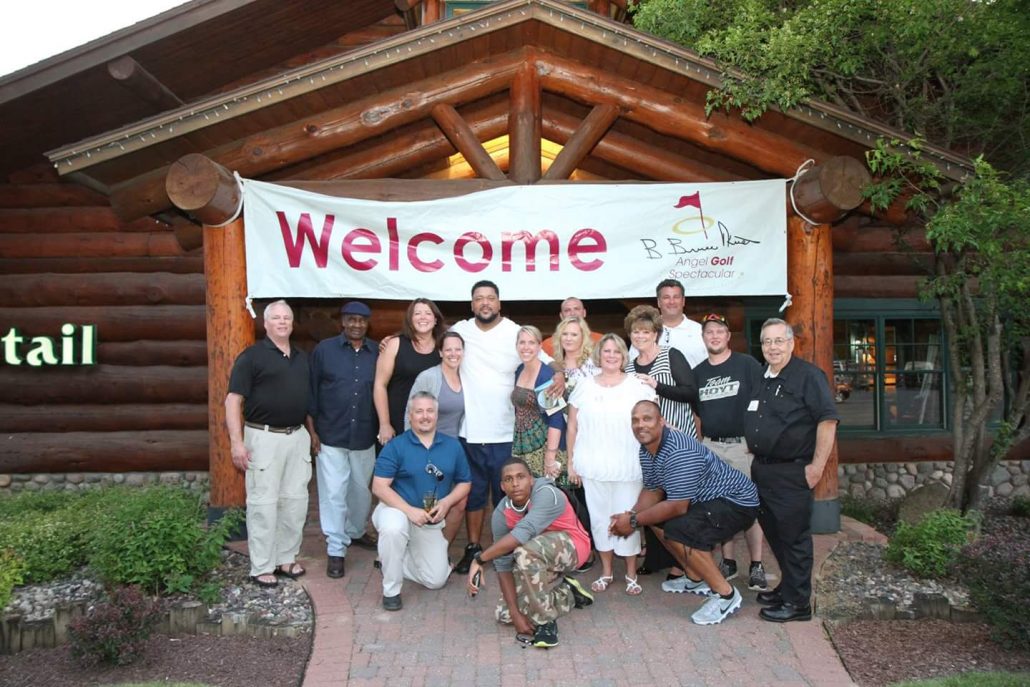 Charlie Kotke and Peggy Nimz: A Dynamic Duo for Angel On My Shoulder

Peggy Nimz and Charlie Kotke have become familiar faces at Angel On My Shoulder. Born and raised in St. Germain, Peggy (maiden name Breese) has been married to her husband Scott for 29 years and the couple has one son, Ryan. Peggy works at Ascension Ministry Medical Group in Woodruff as a Certified Medical Assistant, while Scott is a general contractor with his own business of 30-plus years.

“I love being able to go into St. Germain and know most of the locals,” Peggy said, adding that St. Germain is growing and there are many new faces, too.  “I used to own my own business (P.S.S. Inc. Professional Secretarial Service in St. Germain) and started doing small jobs for Angel On My Shoulder.”

During this time Peggy wore many caps. She was on the Town Board, the Board for the Chamber of Commerce, the Snowmobile Club, the Rocky Mountain Elk Foundation, and Plum Lake Ambulance Service. “But nothing has or will ever compare to Angel On My Shoulder.”

Charlie Kotke hails from Park Falls, Wisconsin, where he was a volunteer fireman and worked as an EMT with the Park Falls Ambulance Service.

“Since graduating from nursing I have worked with Ministry Health Care, which is now Ascension,” Charlie said. “I’m currently the Regional Manager of Transport Services for Ascension Wisconsin Spirit Medical Transport.”  Charlie manages ground and air ambulance operations for the region that services five hospitals within Ascension as well as other facilities in the area.

Peggy’s involvement began in 2003 when she was on the Town Board for St. Germain.

“My husband and I were asked to represent the Town Board at the dinner,” Peggy said. “I had mentioned to Lolly at the end of the dinner that we would love to volunteer.  And so it began.”

Over the next few years Peggy, her husband and their son helped during the Golf Spectacular and it kept growing with more friends and family stepping in. “During this time I was working for Oneida County Ambulance and Northwoods Transfer which evolved into what is today, Spirit Medical Transport,” said Peggy. “I worked with Charlie Kotke and we became the coordinators for the event.”

Until recently Charlie and Peggy were involved in the fund raising portion of Angel On My Shoulder. “For the past few years, since we started with Camp Hozhoni, we were able to see where all the fund raising money went to,” Peggy said. “By sending a child to camp or sending their whole family and giving them a chance to get away from everything. By seeing how the fundraising helps everyone, it makes us more eager to raise money for such a great cause.”

For Camp Hozhoni, Charlie and Peggy provide medical services for the campers and their families. “Over the past few years we have gained many friends through this event and look forward to it every year,” Peggy said.

Their focus the last two years has been on the golf event.  “In the past we did both the course and dinner and needed a vacation afterwards!” Peggy said. Currently they organize every detail on the course, “From our friends and family that volunteer and make the day a huge success, to the businesses that donate food, beverages, equipment, etc.”

Added Charlie, “For the first few years I was involved as a volunteer for the golf event – working the beverage cart and picking up trash mostly. Then over the last several years Peggy and I have been the coordinators for the event, which is the largest fundraiser for Angel On My Shoulder.”

In addition to the golf event, Charlie and Peggy have been involved with Winter Camp Hozhoni. “I had been involved in another camp in the area volunteering as camp nurse for a week long autism camp,” Charlie said. “So when Winter Camp Hozhoni was started in 2016, Lolly had asked if Peggy and I would be willing to help with the camp. For the last three years we have provided the first aid and registration support for the camp, along with helping in any other way we can to make the families that attend that camp have an extraordinary weekend that is focused on fun and not illness.”

Asked about their fondest memories as volunteers, Peggy said, “Meeting the Packers is awesome! At camp we meet so many kids that are affected with cancer and their enthusiasm is contagious. I pray to God every night that these kids bounce back and live full and happy lives. Nobody deserves it as much as them.”

As for the golf event, Peggy added, “We had a horrible storm come through at the end of one tournament and the volunteers all worked together to get the golfers and the food vendors get off the course and into safety. It was amazing how everyone worked together.  I’m so proud of this group and can’t be more grateful for Charlie!”

Charlie added, “The greatest thing I get from volunteering is the friendship and the feeling of accomplishment. Working in the health care field, I have learned that everyone is having a worse day than you are. I look at these kids and their families, seeing how strong they are, then I know that I can make a difference to somebody. Whether it’s a smile, touch, or just listening. I try to ask myself at the end of each day, ‘Did I make a difference today?’”

“Volunteers do not necessarily have the time; they just have the heart.”
~Elizabeth Andrew

A Recipe for Compassion with Joe and Kathy Lass