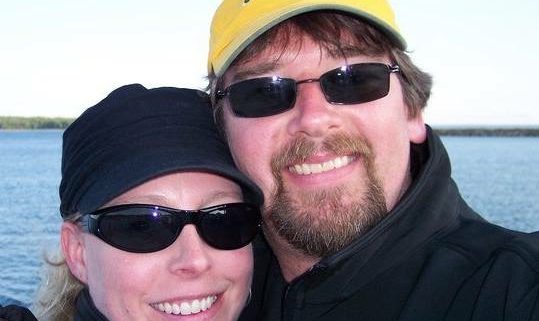 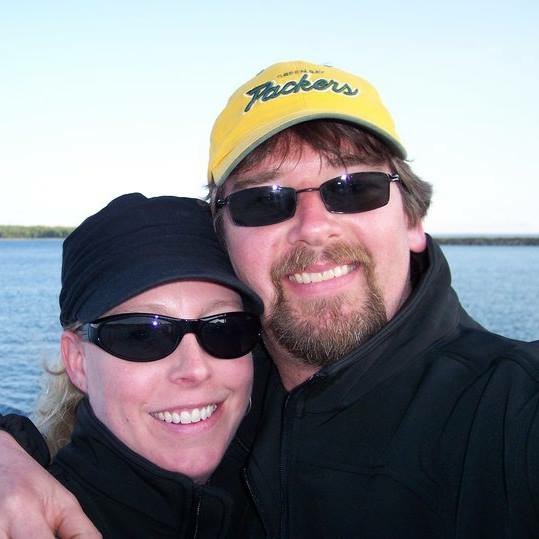 Dick and Amy Lemke have a genuine passion for helping kids, a passion they’ve shown through their involvement with summer and winter Camp Angel. Happily married for six years, Dick has two sons from a first marriage—Cody, who lives in Madison, Myles, who lives in Milwaukee, and daughter Taylor from his second marriage, who lives in Chicago with grandchild Ava, now three.

Dick works for Superior Diesel in Rhinelander and has been involved with Angel On My Shoulder since 2000, when his first wife Dawn was diagnosed with stage four breast cancer and he decided to sign up for the first Polar Bear Plunge.

Amy became involved almost eleven years ago with her co-worker from the local radio station.  “Mike Wolf came up with the idea of the Polar Bear Plunge, and when he started working at WRJO he had an idea about doing an extended on-air fundraiser prior to the Plunge to help raise more money for Camp Angel,” Amy said. “And that’s when we decided to embark on our first Pledge-a-Thon!” Mike introduced Amy to the frigid January waters with her first Polar Bear Plunge and they have continued the Pledge-a-Thon ever since. Amy joined the crowd of jumpers for the next few years, then transitioned into the role of MC for the event and is still doing that today.

Dick met with Lolly during the plunge and she asked if his sons would be interested in coming to a summer and winter camp.  She was also looking for volunteers who had snowmobiles to give rides to children for the winter camp.  Both Dick and Dawn gave rides until her passing on 2008.  Their sons have been campers and have volunteered as counselors over the years. Myles continues to volunteer and is the head counselor for the winter camps.

As Co-Campsite Directors of the summer and winter Camp Angel, Dick and Amy coordinate the activities with each camp location, set up the food process, arrange for special needs for the campers, and all other details for the camp, including coordinating volunteers and the transportation needs for all the children.  “We also oversee any issues that may come up like weather, injuries, illnesses, etc,” said Dick.

After Dawn passed, Lolly asked Dick if he would get more involved with the camps. Then, when Dick and Amy got married, Lolly asked if they would like to become the directors for the winter camp and they accepted.  “After the annual newsletter for AOMS came out Lolly wrote that we were the winter AND summer camp directors,” Dick said. “Well who can say ‘NO’ to Lolly? “

Amy and Dick have been the directors for both camps ever since.  First and foremost in memory of Dawn. The camps meant very much to her, so the Lemke family wants to carry that on.  Also because Amy and Dick love to help these children, having seen the benefits first hand, not only through their own children but with all the campers over the years.

The Plunge holds a very special place for the couple: Not thinking what would happen if Amy said no in front of a thousand people, Dick proposed at the event, and the rest is history!

They’ve met many great people over the years who they consider a whole new family, everyone giving their time and love to these children.  Dick said it’s been a great benefit having his family involved, from his boys to his sister’s family and even his Mom, who plays a big part with the camps. Over the years these kids have stayed in touch, not only with each other but with Amy and Dick. “Being involved with Angel On My Shoulder not only changes a child’s life… it changes yours!”

Angels in Every Sense of the Word